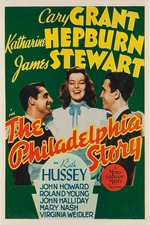 As a star vehicle for Hepburn, Grant and especially Stewart, The Philadelphia Story is aces. All three get to cook, working within their respective skillsets in a way that makes the film feel like an NBA All-Star game. In particular the pairing of Grant, here playing a smirking mastermind, and Stewart, by turns a surly professor type and a hopeless romantic, is delightful. The script has a number of tidy flourishes and well written arcs, but it ultimately lacks the high end punch to take this over the top. To belabor my comparison, it's like watching our all stars taking turns doing what they do best without seeing a brilliant game plan devised to getting them playing off each other more. It's possible proximity to my watching His Girl Friday is weighing down the comparison just a tad, but the difference in Hawks' rapid-fire direction and this feels very dramatic. Overall still a hoot, can't stress how sensational it is to watch Stewart act like a drunken buffoon for the final half hour, and I really think it has room to grow as well, given how delightful it is to sit through.