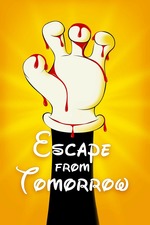 I’ve thought about this movie for about an hour now and I think I know how to condense my thoughts into 4 simple words: This movie sucks farts.

This is an ugly, stupid, manipulative movie that was made on a budget of an expired Hot Topic gift card. The gimmick of this movie sounds incredible. Filmed in secrecy at both US Disney parks without permission as if it’s the modern Rome, Open City. Except it’s not a neorealist masterpiece, it’s a huge pile of shit. Disney didn’t even take legal action despite knowing of the film’s existence, probably because they watched it and said, “this shit is about to tank like Italy’s economy post WWII, we don’t need to do anything.”

The gimmick starts off interesting until you realize that, as a result of limited time, all the performances suck complete ass and the cinematography is nauseating. It’s like found footage except it’s trying to look like high art. It’s absolutely hideous, it’s basically a monochrome filter slapped on a home movie.

The plot is beyond terrible. If you have the balls to film something at Disney, you should at least have a plot that utilizes it. Talk about the dark underbelly, the facade of happiness, the corporate greed. It shouldn’t be about some random twist that happens for 4 minutes and is completely forgot about in lieu of some random ending that is entirely based on some throwaway line.

It’s so bad I actually wanted to visit Disney world more after I finished it.