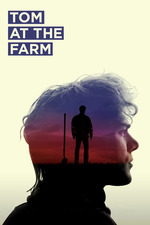 Another Xavier Dolan gem, beautifully shot, with powerful imagery, and strong performances-- by everyone but him.
This time, though, the plot seemed thin and cheap. It being described as a psychological thriller was a bit laughable, until I researched the source material, and understood the genius of the play-- and, ultimately, the message the movie failed to convey.
What we get here is a lackluster tension build and beautiful imagery that won't take you far. Seemingly meaningful scenes, such as the beds', are so out of the blue, you don't pay due attention to them.
You'll feel empty as the credits roll, but make no mistake. There's beauty here. But Tom at the Farm was a flawed transition from play to feature length film.