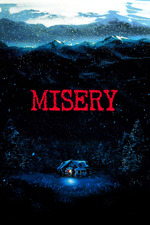 Misery benefits greatly from its lead performances. Kathy Bates is an absolut beast, embodying every aspect of Annie Wilkes-- although these aspects are not pushed to their limit.
This is a great, but flawed, adaptation. Annie Wilkes' monstrousness didn't reach its peak, and the rushed unwind of the plot is hugely anticlimactic.
You'll also notice a neglect with Paul Sheldon's character. As you read the novel, you can almost feel his pain, his hopelessness. While James Caan devilered a heartfelt performance with his puppy face, and while he did suffer here-- he lacked raw and human dispair.
Overall, Misery takes position as one of Stephen King's best adaptations, at the same time it's a showcase of the aspects that could've made it the best one.