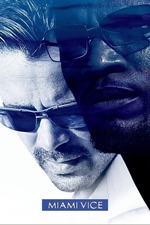 Poetry in motion; where art meets film on the exact same wavelength. Times can change, films can grow old, but Miami Vice will never not be fresher than a Sunday morning. There are films that are great, but Miami Vice isn't just great; it is perhaps one of the most daring, sophisticated and experimental takes on an action film ever, calling back to Branded To Kill or Ashes of Time but perhaps even more fully realised and understood by Mann compared to those masterworks. Mann knows that while the world thinks of film as a narrative artform, in reality it can be anything but. What is the need for narrative when no narrative can mean anything and everything to a person? In a way, Miami Vice almost exactly resembles a poem; flashes of narrative and context burst through in the dialogue here and there, but we don't actually need to know anything to love this film. It's perhaps the best evolution of almost any filmmaker; Mann takes his cool and neon engraved style and highlights and accentuates it, creating an almost euphoric level of atmosphere. There's no need for the formalism that existed in Mann's earlier films, all of it is thrown away for the atmosphere and poetic visuals here. There's no need for context, all of it is in every frame; pictures moving at 24 frames per second in digital, yet holding so much beautiful and controlled texture that could embarass most movies shot on film. In short, this film makes you feel alive; other films try to grab your attention in many ways but Miami Vice makes you give your all without even realising and without it even trying.

And above all, this film may be an action film in name, but perhaps it really isn't. It's a romance, an action, and everything in between; every genre is blending and morphing into each other, to the point where nothing even matters anymore. Miami Vice blurs the line between genre, concepts and time, and what it gives back to us is nothing short of phenomenal and insane. There's no other way to describe it other than that it is absolutely a genius work by a genius director. Films come and go, but Miami Vice is forever. One of the best things to have ever been made; poetry in motion.