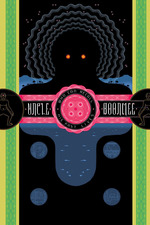 Uncle Boonmee Who Can Recall His Past Lives 2010 ★★

Beautiful shots, but not much else.

I just finished watching this movie for the second time. I saw it twice because I was torn between making the decision of whether it was absolute garbage, or a work of genius. It's pretty much garbage. Sorry.

Picture this: you download some pictures of Thai forests and caves from National Geographic. You then download "Forest Sounds Vol. 2". You play a slide-show of these pictures whilst listening to the ominous and atmospheric sounds of the jungle. After about 10 minutes, you stop what you're doing and sit in a corner for an hour and a half. Then, you go back to your slide-show and sound effects for another 10 minutes. This is the movie in a nutshell.

There are some beautiful shots within the movie, and it's obvious there was some talent because they make a point to keep these still shots on the screen for as long as possible. The background sounds add a lot to the movie as well, but everything else was just plain bad. All of the acting was quiet and monotonous, and it didn't make it seem more natural at all.

The dialogue was terrible. Nothing made sense. As much as I would love to be even more pretentious about movies than I already am, and rave about how people don't understand this movie, there actually is really nothing to understand. All of the characters were the same. Any subtleties within them are just projections of the viewer filling in the blanks, and believe me, they are blank.

The majority of the movie was filler.