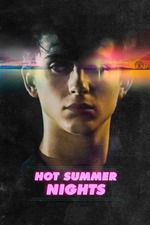 The writing hurt dude. The guy who narrated had a lovely voice, but so much of the dialogue and just text in general came off as unnatural and cliche. All and all it wasn't unpleasant to watch, but I most definitely wouldn't watch again. The editing could have been way better, some of these transitions were a headache. On the level of shots, there were quite a few pretty ones, but they seemed purposeless, like they were there for the express reason that it looked cool. It tries to be a better movie than it is, and its attempts at being a cinematic masterpiece fall mostly flat because the characters aren't well written and the plot is flimsy. Like seriously, one of the biggest problems is that the main character can't date this girl because her big angry brother is gonna rock his shit? The protagonist's obsession with selling could've mean a salvageable point but even that was executed terribly. There was nothing to root for or against, because all the characters were two dimensional. All in all it seems like an almagamation of attempts at making an edgy coming of age movie and failing.

The Edge of Seventeen