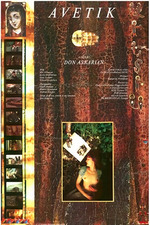 A train shakes Avetik's Berlin apartment when it passes, shuttering the light that comes through the windows. Inside, there are projections: a slide projector showing archival texts, a film projector showing ruins, the Berlin news. A woman interviews Avetik about Armenia. Later, she will be the screen for the projections, will be wrapped in roots. Later, Avetik will lie down in the street outside his apartment as cars pass by.

In the section "Avetik's Childhood," film prints burn at the foot of a dead friend. A frame from Rashomon is held up and inspected. There are too many visual rhymes to trace. It's all poetry -- fruit and bees and bodies and ruins, burning and fragmenting and thawing. Thawing. A gentle confidence in its movements and proximity to flesh and decay. Poetry in a complex relationship to others. Be careful not to read national trauma into an image; be careful not to miss beauty, nor mistake beauty for non-politics. The last section is introduced by two quotes, one of which reads "Don't cry over the dead ... turn your words into poems ..."