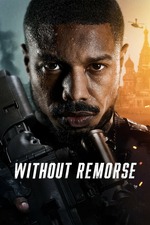 I love a movie based on a Tom Clancy novel.
The Hunt For Red October , Patriot Games , The Sum Of All Fears and Clear And Present Danger and four great action films that i can think of from the top of my head.
Sadly Without Remorse isn't anywhere near good enough to mentioned in the same breath as those despite another good leading man.

Seeking justice for the murder of his pregnant wife, an elite Navy SEAL uncovers a covert plot that threatens to engulf the United States and Russia in an all-out war.

Without doubt , the best thing about this film is Michael B Jordan. He's a very watchable actor who is going from strength to strength.

The film itself had plenty wrong with with it.
The story doesn't have the appeal of a typical Clancy film.
In fact it's pretty dull and the same goes for the action.
It feels like a game of Call Of Duty and after i while i was zoning out.
There is also one very poor bit of casting .
Jodie Turner-Smith who plays Karen Greer is not convincing at all.
Her acting is wooden , she definitely doesn't look like someone from the special forces and they couldn't even get a military uniform that looked right on her.

If you stay till the end of the credits there is another scene in which they indicate that there is going to be another film and it's hinted that it will be Rainbow Six.

I'm not sure there will be much call for it after this offering.