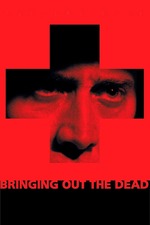 Bringing Out the Dead

If I didn’t know who directed Bringing Out The Dead , I would never have guessed it was a Martin Scorsese film . Apart from the location it really doesn’t have the stamp of one of his movie .

Haunted by the patients he failed to save, an extremely burned-out Manhattan ambulance paramedic fights to maintain his sanity over three fraught and turbulent nights.

This is a strange film . Almost dystopian in its feel . It’s a film about a man suffering from PTSD . A man on the brink , who doesn’t want to do his job anymore yet still want’s to save lives if only for his own piece of mind .

I found this quite depressing. It feels hallucinogenic at times and I guess that’s the feel Scorsese was looking for . That’s is not for me and that’s why I feel it’s definitely one of his weaker films .

The star of this , for me , is Ving Rhames. He’s that little bit of light entertainment that the film is crying out for and I really enjoyed his performance.
This is one of Nic Cage’s better displays also but that’s not really saying much considering how many terribly films he has made .

Scorsese said he didn’t enjoy making this film because of the weather and it being shot almost entirely at night and it kind of shows .
I appreciated the film but I can’t say I enjoyed it either .

We Love liked this review