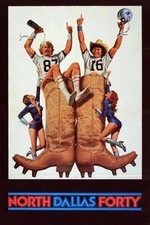 This is my kind of football movie, as it has relatively little football in it. Sure it has some, but North Dallas Forty is a film that is far more concerned about what happens off the field that what happens on it. Also it feels like one of those 70s movies that was meant for adults and doesn't feel dumbed down in any degree.

Nick Nolte, who no matter what age he was seemed to always have that gravelly voice, plays Phil Elliott. He's a wide receiver who loves playing the game, but who 1) can't make it through a night's sleep because of all the pain he is in, 2) is being driven to the breaking point by ownership and management's treatment of players and 3) is desperately trying to hold on to his starting job. Nolte is ridiculously good as Elliott here. He feels beaten and broken down, in body and spirit. He's a realist about everything but his abilities to keep going.

The football team is populated by Mac Davis (singer/songwriter), John Matuszak (sloth from The Goonies), who's given a great outburst at the end, and Bo Svenson (a tree of a man). The management side is full of a trio of classic sniveling actors GD Spradlin, the great Charles Durning, and the biggest jackass of them all, Dabney Coleman. The romantic interest is played by Dayle Haddon, a Canadian actress I had never heard of before. Her character Charlotte is more interesting than most of these type of roles, and the first scene with her and Nolte interacting is a joy, but unfortunately not much is built on that.

This is based on a semi-autobiographical novel of the same name by Peter Gent who played for the Cowboys in the 60s. It does not paint the football league in a positive light. Which is why the league here is not the NFL. I was actually surprised at one point when someone refers to the Super Bowl. You'd think the NFL would have had that trademarked then and wouldn't have allowed it.

The football scenes that are shown seem to be shot in empty stadiums where the stands are in shadows. It's the first sports movie I can think of where the reactions of the crowds mean nothing to the story. It's just about the players and their coaches, and their conflicts with one another. And in a sport where everything is just this side of war, that seems appropriate.

Thanks to @nixskits for recommending this for My Starting Lineup list.