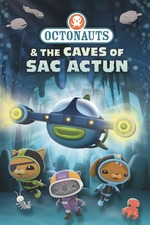 I normally don't do this, but I am reviewing this after having seen the film in chunks literally dozens of times. Yes, I have a young child that loves this show, and he flipped out wanting to watch this movie. I chose to review this today, because we made popcorn and sat down to watch this on a rainy day. It was a great 70 minutes.

I like the TV show, as far as children's programing goes. It is like an animated Mission Impossible with cute animals instead of Tom Cruise.

The story is about returning an Octopus to the Caribbean Sea, but Captain Barnacles and Peso the medic crash their helicopter, and have to take to the underwater caves leading to the ocean. Despite the Captains fear of enclosed spaces. The rest of the crew form a rescue team to go looking for them. They encounter a professional cave explorer, but trouble lurks around every new passageway.

It really is a smart, engaging show that talks to kids in a way that isn't pandering or cloying. It is educational to a point, but doesn't take itself too seriously.

I am Quazi sort of guy. Wildcard!