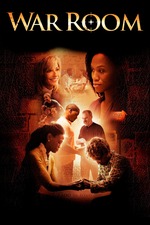 The 7 PM Thursday (i.e., night before official Friday release) crowd for War Room was about 40 strong and totally into it; there was a lot of whopping, cheering, "amen"-ing at appropriate moments throughout (like when the heroine repudiates Satan from her suburban doorstep), etc. You rarely get an audience that's that unforcedly happy to be there, for what it's worth. Since this was my second "faith-based" (i.e., evangelical Christian — the term falsely implies movies are also being made for Jews, Muslims, etc.) release of the year, I was particularly looking forward to the solid block of Christian trailers shown beforehand. I "enjoyed" the trailer for 90 Minutes in Heaven, which proudly announces the film will be released on 9/11, which is about the most horrifically misguided/appalling faux-tribute I can imagine. (All those people died, but there's an upside: we can confirm that those of them who deserved to go to heaven got there!) I was also amused to see that a new, recut trailer for Woodlawn (overcoming racism in high school football via prayer) does not showcase Jon Voight at all, as opposed to the first trailer; I guess he isn't as big a draw for the Christian audience as expected.

Anyway, my review of this garbage is here. In retrospect I should've stressed this film's not-so-subtle misogyny more strongly.