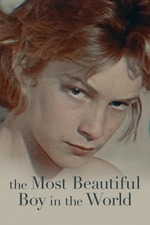 2015’s documentary Helmut Burger, Actor embedded itself in Luchino Visconti’s frequent star/last lover’s filthy apartment. The prompt may have been ostensibly tied to high culture but the result was disreputably compelling, allowing Berger to rant at unedited late-night-drunk voicemail length and (sorry) climaxing with him masturbating to, as they say, completion at (?) director Andreas Horvath. John Waters got the camp-trash idea and named it the best film of 2015; Berger eventually filed a lawsuit. A companion piece in the sub-genre “Visconti Changed My Life and I Never Got Over It,” Kristina Lindstom and Kristian Petri’s far more respectable The Most Beautiful Boy in the World takes its title from the Cannes 1971 Death in Venice press conference, where the director gave that description to his Tadzio, Björn Andrésen. The opening draws heavily upon a TV documentary I didn’t know existed, 1970’s In Search of Tadzio (its director credit is assigned to Visconti, though that seems purely nominal based on its formal merits). This half-hour tracks Visconti on the hunt for perfect youthful beauty—which he unambiguously defines as belonging to the Greek/Nordic realm—in Munich, Stockholm, Helsinki, Budapest and Warsaw. Visconti’s welcomed into classrooms where he scans the aisles for pre-teen boys without a trace of abashment; it’s hard to imagine either his definition of “perfect beauty” or casting methods flying now. The footage is as fascinating as it is bone-chilling, culminating when Andrésen walks through the door; the director’s face lights up and he’s quickly asking Andrésen to strip, then starts getting photos taken of his entire body.