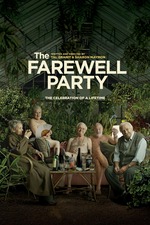 "The Farewell Party hedges its metaphorical bets by making Yehezkel’s wife Levana (Levana Finkelstein) the appalled voice of caution, decrying what she sees as both legally dangerous and ethically untenable. The movie and Yehezkel seek to win her— and hence skeptical members of the audience—over, and that’s thoroughly admirable. What doesn’t work at all is the movie’s alternately bathetic and comic tone (which isn’t smoothed out one bit by sub-functional blocking and digital cinematography from Tobias Hochstein). There’s 'black comedy,' and then there’s the kind of clumsy comic relief this film indulges in, like Yehezkel and his elderly death squad crew walking through a hallway toward their errand of mercy. 'Maybe we should come back when we attract less attention,' one person says, which is the cue for another to loudly knock over a trash can. There’s a subplot about two elderly men in a relationship, one of whom is closeted and still married to his wife. When he’s discovered hiding in a closet, the explanation is, 'He’s still, you know, in the closet.' (Har har.)"

An Israeli euthanasia dramedy. The very worst. Btw, remind me to tell y'all about the time I went with my dad to the Hague so he could ask if them if they had any pamphlets about getting euthanized.