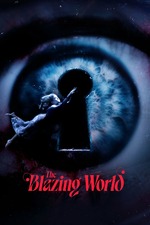 At this point The Blazing World starts to resemble Ready Player One if the latter hadn’t, Overlook Hotel sequence aside, rendered its references as avatars and characters within an original (relatively, anyway) visual world of its own construction and instead made every single shot full-on pastiche. In a production design-minded way, Blazing is impressive, but to no end worth pursuing. On her quest, Margaret’s first dropped into a fantasy desert world to face off against her mom as a mask-wearing grotesque; the landscapes invoke Tarsem’s The Fall, the grotesquerie both his and Young’s antecedent Alejandro Jodorowsky. When Margaret re-enters her alternate-world home to face off against an equally grotesque sinister version of her dad, Isom Innis’s score immaculately recreates Wendy Carlos’s opening synth tones from The Shining; later, Margaret faces a pair of massive doors which open in ominous slow-(e)motion, releasing not a flood of blood but pure, cleansing and symbolic water. A climactic shot manages to simultaneously evoke Neon Demon (Margaret lying on a floor surrounded by neon lighting), Cube (turns out she’s lying in a…cube) and The Cell (that cube’s planted within a similarly Damien Hirst-y space), which is definitely a kind of referential hat trick.