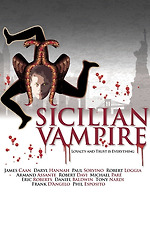 This is a truly awful movie that I wrote up as part of a fairly weird assignment (for Vanity Fair!) which I was more than happy to take on — money's money. The original remit was more or less to explain the reasons for this particular film's existence with this particular cast, but the answers to that were fairly obvious. What became of greater interest to me was the strange, tortured saga of Frank D'Angelo, this film's writer/producer/director/star/musician. I included a bunch of links within the piece to articles about him but didn't find room for perhaps the most unpleasant of them all, a report on the taping of his weekly infomercial/faux-late-night-show Being Frank.

There are vanity filmmakers, and then there's D'Angelo. Truth be told, I could have been far rougher on the guy — for example, I could've mentioned his trial for sexual assault, during which he was acquitted but the judge noted that he was probably guilty. But hey, trying to keep it light. What emerged is that D'Angelo is one of those intensely despised figures of local infamy totally unknown outside his home district; as soon as I mentioned him on Twitter, even before the piece was published, all kinds of Toronto people I'd never heard of popped out out of the woodwork to share their Frank obsession or ambiguously troll me. I'm still not really sure what's up with this guy who tweeted at me basically daily. Someone else I'd never heard of sent me a PhotoShop poster mockup of the movie. It's all quite weird.

I didn't have space to mention what's arguably the film's most indelible exchange. Frank has already become a vampire, while his daughter has gone clubbing. Sleeping, he sees her in the club having her ass grabbed by random dudes. He goes to the club, beats the shit out of everyone, takes her home. Daughter: "Daddy, how did you know who was harassing me?" Frank: "Sweetheart, I can hear a mouse fart." Sometime later that night, the camera zooms around the house and settles on a mouse. It farts and moves out of frame.

Here is a clip from the film of Frank D'Angelo singing "Just a Gigolo." This rendition is heard in full in the film three times.

I haven't even scratched the surface of all that I learned. Anyway, here's the article.