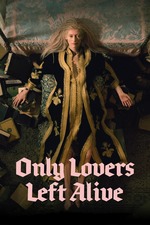 “I saw it on YouTube,” Ava (Mia Wasikowska) says of the campy WTF-was-that? vampire dance number deep cut she’s watching on TV; “of course you did,” sighs Adam (Tom Hiddleston). Kids these days have it too easy: instead of finding their music by doing hours of analogue crate-digging and/or asking the correct cultural gatekeepers (like Jarmusch) what to explore, they’re letting themselves be driven by algorithms and a misguided ironic lust for forgotten oddities. To further damn her, Ava is from Los Angeles, which of course is abhorrent, the shiny shallow opposite of the genteel shabbiness Jarmusch finds comforting.

I suppose Only Lovers could be autocritiquing: these are literal vampires with seemingly endless amounts of money they didn’t earn, and their aggrieved cultural preservation is also vitality-sucking: where is the new blood, etc. But final shot aside (the first time the vampires have actually been an anti-human threat: too little too late as far as driving a POV wedge between subjects and author IMO), it’s hard not to listen and hear Hiddleston’s complaints about contemporary humanity (“zombies,” har har) as speaking directly on behalf of his writer/director. A fair and even reasonable hatred, but articulated in such repetitive and humorless ways it’s hard not to feel it’s all a little (ulp) “lame.” Adam shudders at the possibility of a worthy musical performer becoming famous, saying she’s “far too good for that”: parody of automatic aversion to crossover potential or the real kneejerk thing? There is a line being crossed from principled disgust over the unavoidable fact that most culture (or what passes for it) is shit over to automatically assuming anything out of your immediate frame of reference is of necessity terrible. The opening shots conflate the spinning of a record with the night sky’s stars: a piece of vinyl can contain the entire universe, but the reverse of that macrocosmic conflation is that anything outside of that reference point is straight-up anathema.

If this movie were made by someone other than Jarmusch — a college freshman, for thought experiment’s sake — would thudding references like “Dr. Caligari” be acceptable? Anton Yelchin nails his raspy-voiced rocker lifer, and there’s droll life on the fringes throughout, but this gets near Andy Rooney terrain.