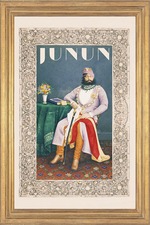 "I don’t think it’s unreasonable to speculate that any director fresh off his second ambitious, divisive high-profile theatrical underperformer/probable money-loser (or anyone fresh out of a recently completed production, really) might generally welcome a chance to get out of town. It’s unclear how far in advance Radiohead’s Jonny Greenwood planned to go to Rajasthan to collaborate on an album with Israeli-born, Indian-residing Sufi convert Shye Ben Tzur, or whether Paul Thomas Anderson initially committed to tagging along; regardless, it seems to have been restorative fun. Junun is a 54-minute music doc in which Anderson shoots whatever he wants, however he wants to. There are five credited camera operators, including Anderson himself and Radiohead’s regular producer Nigel Goodrich, along for the engineering ride. The celluloid purist plunges into his first digital feature, seemingly thrilled at the chance to repeatedly strap the camera to a helicam soaring above the former fort where recording takes place. One of the musicians gives it a genial wave on its initial ascent; later, the camera dives from above close to a flock of large birds semi-aggressively swooping in on pieces of stew meat tossed by one of the musicians. The camera mount can sometimes be seen, the operators spotted; Anderson doesn’t seem bothered."