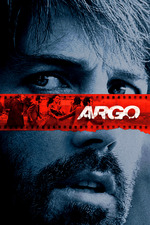 It's bad form to bitch about your preferred version of a film vs. what's actually on-screen, but in this case the weaknesses in construction are so glaring it's hard not to object. Succinct opening seamlessly cuts between archival footage and re-creation; displaying the same interest in fidelity that led to numerous obvious real-life alcoholics and other Bostonians populating the backgrounds of Gone Baby Gone, Affleck keeps the archival stuff in 1.85, the recreations in widescreen. Opening mechanics less clunky than usual, even if the usual "West Wing" shot of two folks walking-and-talking inexplicably gets cut into two separate close-ups, but the tense escape-from-the-embassy opening and State department meetings of the opening quickly deflate. The Hollywood jokes are sub-layups (think the Iranians are tough try the WGA CHORTLE CHORTLE), pandering snipes at one of the world's easiest topics in the world (see also: used car salesman, "politicians" in the most generalized sense) without any real specificity. Narrative largely tediously intercut between those effectuating the mission and the whiny clandestine captives being rescued, disclosing their back-stories in hack-y one-anecdote-per-scene disclosure (worst offender being the staffer who guiltily muses about how he made his wife stay with him in service even after she asked to leave). Finale somewhat suspenseful, although given that at this point in the movie shit's being made up wholesale you'd think someone would try harder.

The movie hints at satire, and a much stronger version would've been the cynical CIA hack getting the near-hostages to join into the game, ignoring their perspective until Affleck meets them, but no. I maintain that Gone Baby Gone shows Affleck has a lot going for him as a director, but the mechanical beats here don't even make sense: why, pray tell, if his role as a clandestine hero couldn't be classified, does his wife tearily embrace him when he returns home? Oh right, cuz god and apple pie. Non-pious liberals would've had a field day with a protagonist working for the same government division that fantasized about assassinating Fidel Castro with an exploding cigar who once (successfully!) organized a rescue mission using a pop-up doll, but instead we get a lot of earnest lip-quivering, plus Alan Arkin being enjoyably salty and a closing Jimmy Carter voice-over about how the mission demonstrated the benefits of international non-violent cooperation, generating big applause from my Brooklyn audience. Get Ben back to Boston please.

[ADDENDUM: Friend texted with one thing I'd forgotten: the analogy between trying to get an operation greenlit by the government and trying to get a movie greenlit? So clever. In fact the movie's most subversive suggestion, which seems totally unintentional, is that Hollywood monoculture is worthless except that it provides a plausible cover for rogue government operations. Star Wars existed to give Jimmy Carter — not Reagan — cover. Whatever. My friend has a real job to pursue, otherwise I'd give him name credit.]