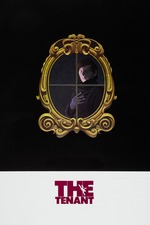 God, I am obsessed with this movie. The Tenant explores some of the most interesting and unnerving ideas I have seen in a horror film. It’s the first film I have seen in a long time that has inspired me to write this long of a review, so.

The Tenant is a gothic Kafka tale of urban alienation and oppression. It’s about the fatal lines between diplomacy, assimilation, and self-suppression. At what point does harmlessly trying to fit in with your surroundings become a suppression of your true self? When does a suppression of self become a fatalistic identity collapse? Is self-suppression as a means of conformity a form of oppression? The Tenant asks interesting questions and explores complicated existential, psychological and societal ideas with such palpable paranoia.

All throughout the film, Polanski complicates and obfuscates the nature of how much Trelkovsky is truly being oppressed. The film often changes perspectives from Trelkovsky’s subjective to the objective, revealing that, quite obviously, much of how Trelkovsky feels oppressed is him projecting and amplifying things in his head. Much of the film is indeed just Trelkovsky going mad and thinking the world is out to get him. But there still is very much a real, objective oppression that catalyzed this madness. And there are people who, likely not even cognizant of the consequences, encourage Trelkovsky’s transformation of identity. An identity which the patient first hour of the film vividly illustrates to be a very reserved, mild-mannered and unassuming one, which is important to why he falls victim to this. He eventually adopts Choule’s choice of cigarette, as repeatedly encouraged by the shop owner, with his diplomacy rendering him complicit in his annihilation of self. There are notable outside forces that subtly encourage Trelkovsky to change, but his reserved personality and diplomacy seem to provide the egg for the oppressive sperm to fertilize further delusional self-suppression.

However, like I said, there is still real oppression that motivates Trelkovsky’s mad self-transformation. If we pay attention to who has accents in the film, it is impossible to count it coincidence that the only characters with “foreign” accents are the ones who the rest of the tenant’s are trying to get kicked out. In this light, the film reads one way as an obvious yet potent allegory of the minority or immigrant experience, which has all sorts of obvious personal connections to Polanski and what his experience during and after the War must have been like. Much of Trelkovsky’s perceptions are false, but his horrific projections and experiences are nonetheless due to at least some level of real, actual oppression.

And thats life. And nothing will change. This is just the way it is, and it will keep happening, an idea reinforced by the narratively-frustrating time-loop that the ending of the film suggests. In a society, there will always be the oppressed. The Tenant exemplifies an incredibly obvious, yet altogether important truth, and it is that we we have yet to figure out how to comfortably cohabitate. And we probably never will, as the film’s uncomfortable and nonsensical time-loop scarily suggest. Sure, in the grand scheme of history, were gotten ~fairly~ good at it. But there will (sadly and likely) always be eternally recurring prejudice, conflicting interests and behaviour, an oppressive motivation to conform, etc. Living and dealing with other humans is difficult, and Polanski illustrates this unnervingly, using the apartment setting as such a purposeful and effective microcosm for all of these ideas. The Tenant is a patient masterpiece of identity, alienation, assimilation and paranoia, exploring so many interesting and resonant existential ideas with such a unique and unsettling brand of surreal horror.