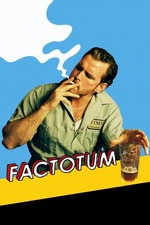 Judging from the movies that have been adapted from his work you’d think Charles Bukowski had only one story to tell (not so), but at least this go-round is perceptive enough to frame its by now familiar belly crawl through Skid Row as fiction rather than auto-hagiography. It’s a hell of a tightrope to walk: Factotum gives us both the hard-drinking, uncompromising literary maverick impossibly unburdened by whiskey dick and graced with movie-star good looks Bukowski wanted to be, and the physically repugnant, comically self-aggrandizing flunky blowhard he knew he was (and delighted in taking the piss out of). This divide gives the movie space to develop a real arc and access the pathos usually overlooked in Bukowski’s material, and to slyly expose the sick joke at its heart — the idiotically romantic, inherently conservative notion that poverty and addiction are character-building conditions.

Matt Dillon walks the line with Chaplinesque grace, and Lily Taylor — dialing her manic pixie nightmare girl routine up to 11 — meets him head-on; I’d happily watch a couple of TV seasons of these two boozing, balling, and brawling their way to oblivion. Has anyone rebooted The Honeymooners yet?

Still, there are a couple of shaky supporting performances, some truly awful and inappropriately timed musical cues, and a general cheapness to the look of the thing (Minneapolis subbing for Los Angeles is plain perverse) that influenced my rating. But overall, this gets closer to the hilarity and exhaustion of reading Bukowski than any cinematic effort so far, and it almost makes me look forward to the next one. No hurry on that, though.