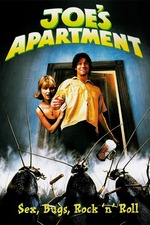 kind of the total package as far as gen-xploitation is concerned. the full suite of mtv interstitial iconography and a certain type of white-boy slacker sludginess. joe goes to work as a urinal cake inspector. if that job title isn’t the most 90s thing you’ve ever heard of, then i don’t know what is. there’s even a cameo from a pre-fame moby??

and those roaches! i love them!! “kitty cat rodeo” and “funky towel” are perfect songs.  the direction by john payson would have almost certainly been immediately rewarded with a stab at the IP of his choice had this been more commercially successful or it had been twenty years later. i wonder what his scooby-doo or muppet movie might have been like.

this rules. it’s so cool and i wanted to see it so bad based on the trailer i saw when i went to see twister at age eight but wasn’t allowed to go even though i was allowed to see pg-13 movies. my mom had a very strange bias against mtv for no real reason.