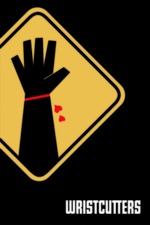 A movie called Wristcutters and you think its about a bunch of emos falling in love and cutting them self? boy was I wrong.

Pretty nice concept about people who have killed them self living in another life like world.

The movie follows Zia who has commited suicide and is now living in this world among other people who have offed themselves. He finds out his girlfriend has also killed herself about a month after him so he set's out on a roadtrip to find her.

Wouldn't hurt checking it out even for just the concept alone.