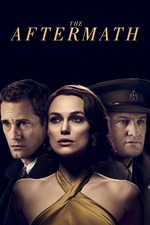 Like Germany in 1946, when the film is set, The Aftermath is about two people trying to figure out how to rebuild their lives after unthinkable loss. A timeless tale of love and grief, director James Kent's period drama starring a predictable, but charismatic-as-ever Keira Knightley, a compassionate and broken Jason Clarke, and a guarded yet incredibly earnest Alexander Skarsgård The Aftermath is as adult a drama as one could hope to see in the multiplex these days. Consistently choosing to play things in a restrained and mature manner, the film is elevated not by succumbing to the tropes of its story simply by acknowledging them, but in highlighting said beats by cutting to the core of the emotions that motivate them.

Y'all are sleeping on this one.