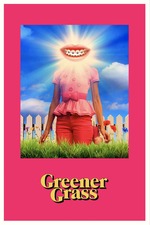 Haha, what the hell is this brilliant baffling movie?

Unquestionably the strangest and most WTF film of the year -- perhaps the funniest as well -- Jocelyn DeBoer's and Dawn Luebbe's Greener Grass plays out like the longest and most demented SNL sketch that was cut for time and thrown on YouTube the next morning, ready for no one of significance but everyone on drugs to discover as the cult hit of 2019. My goodness if you haven't seen this acid trip of a comedy-thriller-soap-horror-melodrama-mystery, rectify that right goddamn now.

☆"I think I made a horrible mistake."
"Yeah! Why would you give your baby to Lisa… and not me?!"☆

(This movie has about 84 incredible quotable lines. I cannot help but post my favorites.)

DeBoer and Luebbe direct, write, produce, and star in a truly singular film. Jill (DeBoer) and Lisa (Luebbe) are housewives in a town seemingly in a universe all its own. Married to Nick (Beck Bennett) and Dennis (Neil Casey), respectively, their fucked-up little community is like if Instagram exploded in a nuclear bomb over Desperate Housewives' Wisteria Lane. Every adult wears braces and some shade of pink or blue, except the only black family who wears orange. The soccer field is home base in this insular town where every child seems miserable and every family owns a golf cart to drive between every location. Gossip and personal affairs dominate their daily lives, until one day when a young woman ("sister, ex-girlfriend, yoga teacher") is murdered, allegedly by the grocery store's bagboy. This mystery hovers over the community until the tension and drama drive its people to places unknown.

☆"Oh, I'm sorry. I'll replace it."
"It's not really replaceable. My mother made it… before she killed my father… and my brother… and my sister too."☆

The plot is a little superfluous to Greener Grass, as the film is an exercise in world-building and commitment to outlandish insanity with deadpan sincerity. Based upon their short film of the same name, this feature length version triples down on the outright bonkers premise.

High contrast bright edges oversaturate the cinematography of Lowell A. Meyer, complemented by an 80s-sitcom type score by Samuel Nobles that hints at a horror send-up, but there's something deeper going on with Greener Grass than just a twist on genres.

☆"Can you name the most successful sharecropper in this county?"
"Heh, your mom."
"That's right."☆

There are brief guest appearances and supporting roles I don't want to spoil -- I'll mention that you don't want to miss Jim Cummings in an amazing brief scene -- as well as two impressive child performances by Julian Hillard and Asher Miles Fallica. Seemingly random vignettes in fact have a purposeful connection. Perhaps the film is about 10 or 15 minutes longer than needed, despite the constant black humour that never gets overwrought. Plus, there's a very good doggo who plays an important part.

☆"I am trying to get dinner on the goddamn table!"
"But eggs are for breakfast!"
"WHAT?!"☆

Probably the best comedy of the year. Independent Spirit Award nominee for best first screenplay, DeBoer and Luebbe have made a picture that deserves repeated late-night screenings and cult devotion in the worst way.

Portrait of a Lady on Fire