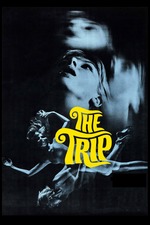 "What Police?
There Are No Police.
I Don't Believe In Police."

The Trip as written by Jack Nicholson and directed by Roger Corman might be the most authentic point-by-point recreation of what it is like to take LSD. Peter Fonda is getting divorced which is naturally a bummer, so he goes over to Dennis Hopper's house to drop acid while Bruce Dern watches over him. I want Bruce Dern to be my once and future trip guide as he is totally chill. Dennis Hopper is exactly the semi-skeevy but alright dude in a hippie poncho who deals as a public service toward mass enlightenment. The 'real world' aspect of The Trip is almost ethnographic in attention to accurate detail while the phantasmagoric/allegorical aspects are like a more laid-back Californian precognition of the rest of Jodorowsky's career. For sure I had a distinct lack of hooded riders on any trip I was ever on, which makes me feel sad and lame in retrospect. The best part of this movie is when Peter Fonda enters a Gothic Roger Corman Movie from the Roger Corman Movie he was in before. I would never advocate the use of psychedelic drugs for anyone else but I in the past found them useful for putting life transitions in perspective, so I say Right On! Peter Fonda. We disagree in that whenever Dennis Hopper were to offer me weed, I would never turn it down. [Note: Although I have been a Medical Marijuana user for my entire adult life, I have had to go without it for almost 6 years due to my compliance with state laws, even though I have desperately needed it even for basic functioning.] The non-narrative optical effects sequences in The Trip are amazingly biologically accurate, from phosphene activity to fractal kaleidoscope overlay. The Rapid Montage Editing when it kicks in might feel a little of its time, but is still way righteous. The Trip also accurately depicts Going To The Laundromat On Acid and Going Out To A Niteclub On Acid, both of which made me laugh out loud in recognition. The weirdest thing about The Trip was that it made my body remember, 'flash back' even, to what it felt like to be on LSD even though I gave it up 20 years ago. There is probably no greater recommendation, however involuntary.