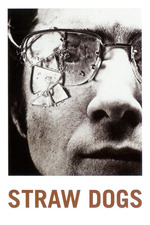 ABORTION ON DEMAND WITHOUT APOLOGY!!!’s review published on Letterboxd:

NOTE: Even though I have spoiler-warning on, I just wanted to say that this review unlike most of my reviews, really does spoil nearly everything in Straw Dogs, so Be Forewarned!

The story in Straw Dogs that I am interested in is Susan George's story. Her character, Amy, wanted to walk down the street in her village, a village comprised primarily or entirely of child molesters, murderers, alcoholics, rapists and maybe a Major (and later on a Vicar who has read Montiesquieu and the Vicar's wife) and assorted women and children, free of suggestion, to be able to not wear a bra, to be able to satisfy her intellectual curiosity, so somehow she goes off to find a world that can offer her a larger degree of freedom, safety and a different kind of care and concern. What she finds is a petty, smug bully of a mathematician who treats her like a dog to scold or a small child to condescend to, someone who is so certain of their own superiority and value that outside influence is a nuisance. Then, after some professional disaster, Amy and the mathematician move back to the village of molesters, drunks, murderers and rapists, crushing Amy's hopes and spirits. The village, too, does not react kindly to an outsider who brings a different manifestation of disgusting male privilege than they are used to, and so when the inevitable confrontation develops, Amy is trapped in the middle of vile versus vile, and no matter what happens, she is the loser. In Straw Dogs, any presentation of autonomic female sexuality is punished by rape or murder. Also if you are a cat or a rat, you will be abused by creep mathematicians, hung or used as a projectile siege weapon. Instead of having logical causality occur where one event necessitates or clearly causes another, Straw Dogs just gives us one awful thing after another which occur parallel or off to the side of each other. I waited until now to watch this movie because I thought I probably wouldn't like it. And I don't think I do. I do like Peckinpah's attempt at Folk Horror. That is pretty awesome. I like the slow-motion shotgun blast. That is rad too. I like the fog and the skipping record, a device borrowed into The Strangers, a film which clearly is indebted to Straw Dogs, one of the initial home invasion horrors. It is worth noting that in Straw Dogs, first Dustin Hoffman invades the village (and in their eyes Susan George) and then the village invades him. For years I read about how Straw Dogs was controversial in its potentially ambiguous depiction of Susan George's rape scene. It didn't seem ambiguous to me. She said no over and over. She was hit in the face over and over and forced down, her clothes removed by force and raped by a long-ago maybe boyfriend and then raped again by his friend. It is horrifying. Consent was never given. Susan George's character was brutalized. The horror further extends when her husband never finds out about this rape but treats his obviously hit and traumatized wife like garbage, preferring to harbor a child murderer and potential rapist in his home at the cost of killing a bunch of people, including, totally by accident, his wife's rapists, while in the process, hitting her again and again and verbally abusing her. For me, this movie ends up in the same kind of position as The Last House On The Left, a film that triggered a more modern understanding of what horror can be, but not one that I like or even feel is especially effective. Points given for the most obvious use of Chekov's guns AND Chekov's mantrap, which displaces the guns and is in fact, pretty funny. One could make a point about how the horror of patriarchy, inscribed into territoriality, is an illogical absurdity even on its own terms, all of which is true, but that doesn't mean it adds up to a film I like.

ABORTION ON DEMAND WITHOUT APOLOGY!!! liked these reviews

ABORTION ON DEMAND WITHOUT APOLOGY!!! is using Letterboxd to share film reviews and lists with friends. Join here.

ABORTION ON DEMAND WITHOUT APOLOGY!!!’s films