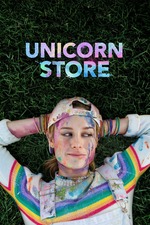 NOT THE BEST ON NETFLIX

Hi everybody. This next Netflix movie has been finished for a long time, but found no platform for releas. Brie Larsons first directing work is a Comedy-Drama that stares herself as Kit a young woman, who is making the first steps to be a grown up, but she wishes more than anything, to have a unicorn. The near past movies like "Isn't it Romantic" or "The boy who harnessed the Wind" did a much better job in their genres, the later was also the first directing work from Chiwetel Ejifor, best known incredible actor, just like Brie Larson. Unicorn Store would have put more focus on one genre than be a little mix of both.

So the movie is creative but plays that not out. One awkward scene hunts another and I personally wanted to end the movie after 30 minutes, but also wanted to write a review so I forced myself to keep up. And some aspects are really not that bad. The little coming of age story is in this case unspend and a nice thought, but the implementation is a total missfire. The awkward scenes mentioned like the conversation about Jesus or the "Mysti Vac" presentation, caused a really unwell feeling in my stomach.

The first time I noticed this is going in a weird and boring direction was after 20 minutes. Until then I thought that there comes something up every minute, but no. At least the movie remained true to itself. So if you are watching it yourself and think it gets better, I wouldn't bet on that. In other Netflix movies like "The Highwaymen" you can definitely recognize a plot. That was my whole feeling about the movie, it never starts to gaining interest or at least a bond to the character of Brie Larson. She is the center of the movie and no other figurer has either enough screetime nor is properly introduced. She proved with movies like "Room" that she can act in the first league and received an Oscar for that performance. But here she falls a bit in the old habits of "Kong Skull Island" with the every same faces. The high quality I praise on other movies like "Triple Frontier" is not given. Some technical points like the never steady camera or the "over the top" score are actually quite annoying. Dialogue are in most cases simply awkward especially between Kit and Virgil. There are so many unnecessary dialogues and scenes which could have cutted out, and the movie is not very long already. The best part about this film are some deep lines I quoted here.

"Well every person alive has a dream. Everybody needs some magic in their lives, even if they're all grown up."
(Kit)

Well everyone has dreams, my for example is that superheroes get real (xD), but for this cute message I don't need to watch this film. I'm aware of the heavy topics cuts like sexual harassment at work, but it's not really effective. There is no surely catchy or interesting sequence created. I'm apparently not the target group or the movie is just not good. Or it's a little bit of both because the end result is somewhere a nice try and creative, but totally unnecessary.

(We wrote reviews to all mentioned films, except "Room")