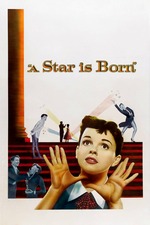 'Hello, everybody. This is Mrs. Norman Maine..' (Judy Garland as Esther Blodgett/Vicki Lester)

Director George Cukor was signed by Warner Brothers in 1953 to direct Garland in an expensive musical remake of the fast paced 1937 Fredric March/Janet Gaynor original, itself a picture inspired by Cukor's What Price Hollywood? (1932), an acidic satire of Hollywood ethics.

For Judy, it was arguably the biggest challenge of her career and the film draws on her qualities as both dramatic actress and singer, mixing light moments and comedy with the serious and even tragic, with Cukor's patience and well known talent for handling 'difficult' actresses tested to the full by his star's insecurities and unpredictability.

Cukor's problems were intensified by the technical difficulties he experienced in shooting his first colour picture (apart from a brief segment of 1939's The Women) in the relatively new CinemaScope process, leading to escalating costs and the studio's decision - to the fury and bitterness of the director - to cut half an hour or so from the three hour running time.

Despite all of these handicaps, the film emerges as a triumph right from the opening scene: the glitter of a Hollywood function where fading star Norman Maine (Mason) first glimpses the band singer (Garland) whom he'll marry and make a star.

Here's a picture whose rich emotional range and imaginative use of the showbiz milieu is presented with compelling conviction by Cukor who blends music, wit and romantic tragedy into a perfect concoction..

Judy is just electrifying in the part with no gesture or expression wasted; watch her turn a torch song like The Man That Got Away into a powerhouse performance, and then contrast that with the intimate Somewhere There's A Someone, a song Esther/Vicki sings for Norman in their own living room, mocking the big production number she has been rehearsing at the studio and using household props - chairs, lamps, trollies and cushions - to domesticate the number: utter genius!

Not to be outdone, Mason is also magnificent and achieves real pathos as his character's life and career spiral out of control, especially in the many drunken displays which culminate in a humiliating appearance at the Academy Awards where Norman hits rock bottom and interrupts his wife's acceptance speech, begging for work and losing the final shreds of his dignity: spellbinding stuff!

Trivia Note: In 1983 most of the cut footage was found and re-instated but some scenes had to be reconstructed using production stills as only the soundtrack remained.