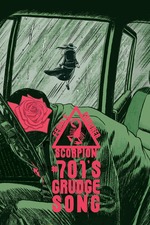 “Matsu is helped by a strip club worker who holds a grudge against a detective.“

This is the final entry in the Female Prisoner Scorpion Series and it’s the weakest one out of all 4 films which is a shame because these are some brilliant films. It’s not a bad film but I felt I wasn’t entertained as much as I was with the previous films.

The plot is non existent and I found it to be disappointing but the last 30 minutes and that’s where the film is strong. It’s a shame the rest of film wasn’t. There’s nudity which has become a habit with these early Japanese Films.

Meiko Kaji & Masakazu Tamura both star and do a decent job in their roles. Meiko Kaji reprises her role from the first 3 films and she’s excellent as always. She shows why she’s regarded as one of the best in Japanese Film.

The change of director baffles me and is annoying. Shunya Itō who directed the previous 3 female Prisoner Scorpion was replaced by Yasuharu Hasebe which was a shame. I thought Shunya Itō was a fantastic choice and he even won a Directors Guild of Japan New Directors Award for Female Prisoner #701: Scorpion which is a great achievement and it’s a shame he didn’t return to finish of what he started.