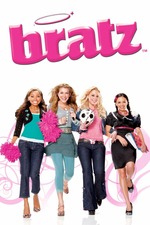 This does everything a film of this caliber needs to do and then goes absolutely above and beyond.

The 2000s speak to me as the height of emotional honesty and sincerity not only because of it's shift away from the bitter cynicism of the 90s, but because of the struggle to find identity American culture was going through. Musicians were trying weirder things, fashion designers wanted to stun others through excess, and film directors were more open to trying out more maximalist styles to really drive their themes home. Bratz is no exception, taking an inherently empty and highly criticized dolls of the same name and carving them a spot in a humanity driven artistic movement. Each girl is given a distinct personality, racial background, and interests that all compliment themselves and each other in empowering ways. There's two pretty major arcs that happen in this film that both threaten to break up the power dynamic these four have, but each plot line shows them strengthening their relationship in respectfully intelligent ways.

These women do not exist in a vacuum of stereotypes and cliches but rather actively attempt to defy them through honest emotion and feelings for one another. This isn't something that feels forced not only because of the very human and clever writing, but because of the support each aspect of the film is given. One example can be found in the love lives in three of the girls - Cloe, Yasmin, and Jade. These three get a caring and sweet guy to call theirs, each through their own indivdual merits and skills, and even though Sasha does not get one at the end of the film, she is still just as happy and empowered as her friends. Bratz avoids being shallow at every opportunity, substituting legitimately empowering and multi-dimensional characters for the stuck-up pretty girls that end up becoming the antagonist of the film. What's pretty incredible about this is the film's breakneck pace actually fueling the emotions on screen. This makes not only the comedy much funnier and cuter, but when scenes do linger for emotional effect, they hit a lot harder than they have any right to.

The tone is established pretty early on that this will be an energetic and satiric look at human relationships in the sphere of high school culture and it sticks with it. Many of the problems the girls have revolve around their social standing not only at school, but in the real working world as well. Bratz doesn't shy away from the meanness of high school cliques and exists to tear down the artificial walls they have blocking each other in order to communicate and grow as people more freely. This really wouldn't happen in a film like this until the end, but Bratz wants to explore the benefits and joy that come along with mutual understanding, and do so beautifully. This works at its most thematically resonant when the catty mean girl Meredith, who has been trying to humiliate the girls the whole film who ironically builds their characters up, calls them all THE BRATS - and they embrace it. They ironically don the name The Bratz in order to tear down the negative connotation it bears to promote friendship and kindness. Plenty of other lines hit on this level too, such as when the deaf boy says "I can't hear - but I can hear you" to Yasmin as she pours out her heart into a vocal performance for the first time. Everyone is working on bettering themselves while assisting others as well, never tearing them down or neglecting feelings they have.

It seems like Corbett took the many necessary criticisms of the toy line and strove to create something uplifting and celebratory of it and knocked it out of the park. Some of the comedy has some awkward timing to it because of some hesitant directing, but everyone usually absolutely goes IN in order to create one of the most joyous and empowering films I've ever seen. Tears were in my eyes during the Talent Show performance. People need to be themselves and find a personality that speaks to their own individual strengths and goals to become the best version of yourself you can be, even if that includes taking a looked down upon product and subverting the notions surrounding it to create a wonderfully human work of art.

Bratz is New Sincerity. This isn't about creating a false image to purport what you want to show everyone, but rather creating a true image and finding comfort in yourself to share and grow with others on a more personal level.