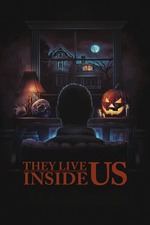 I was really surprised to watch this and come on here and find so many low ratings although I guess I shouldn’t be. It seems like 2020 has made people harder on movies and everything else and I totally get that, but the main complaints here seem to be that it’s boring and has bad cinematography and I respectfully but firmly disagree with both!

It’s based on an anthology story I haven’t seen, so I admit I can’t speak to that and it could change my opinion of this feature length version, but I was entertained throughout and though it moved along nicely! Of course, a lot of that had to do with the legitimately AMAZING atmosphere. Honestly, I haven’t seen a movie this Halloween-y in a long time. It just oozes Halloween night, fall leaves, pumpkins, and stormy weather and the haunted house setting is my perfect cup of tea so maybe I’m a bit biased. Sure, there’s more style than substance here, but my goodness what style it is!

The cinematography worked for me too, with certain parts filmed with a grainy retro filter to indicate scenes that were taking place inside the main characters mind and he’s a screenwriter so I thought it was a neat idea. I also kinda thought the lead was cute so some bias there. His frightened and surprised faces were kinda dumb but super adorable and oddly attractive. What? I love men in all kinds of different ways! Just your friendly retired neighborhood whore here.

Also, just LOOK at that poster and tell me it isn’t one of the greatest ones you’ve seen in a minute. Like a RL Stine book cover and that’s some good vibes if anything is.