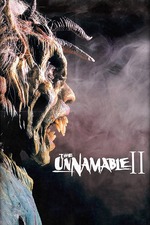 Well it only took me over a year to finally get around to watching this sequel but I did it, mostly because I’m trying to catch up on dvds I’ve purchased but haven’t watched, mostly because I just got a shit ton more of new ones to also watch!

Anyway, this was pretty good! It lacks the atmosphere of the first one, but the creature is as badass as ever and its human form is played by Maria Ford back before she plastic surgeried herself into a living fetish doll. This is a pretty good blend of 90’s dtv horror that still has firm roots in the 80’s.

At one point, a female police officer busts into the room and upon seeing the creature shouts “oh great, it’s a bitch!” before firing her weapon so ya know, obviously I loved that.