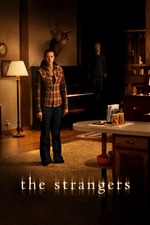 I started to watch the sequel and then realized I owned the first one so I decided to watch it first so here we are. As far as home invasion horror movies go, this one is really well done. It starts out slow, but I feel like that actually adds to the effectiveness of what comes later. Like, these people are doing absolutely nothing interesting and just being totally normal and then whoa things go right around the damn bend.

Liv Tyler is the business. She’s beautiful and a good actress and she really makes you believe her fear in this. I won’t even lie, I’ve been crushing on Scott Speedman since Felicity and he maybe isn’t the best actor, but he doesn’t really need to be now does he? Also, I love that Dennis from It’s Always Sunny pops in for a quick hello because it’s just so something he would do but with some harsh real world results.

This movie is dark and pretty mean spirited so if you don’t enjoy either of those then I’m really surprised you’re reading this, but also maybe don’t watch this. If you like it scary and bleak, then there might be something wrong with you (and me) and this should be good times.

Night of the Zombies