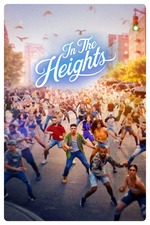 Before it was delayed to 2021, the film adaptation of In the Heights was my most anticipated movie of 2020, partly because I already knew that I loved the musical. I know a lot of people have issues with Lin-Manuel Miranda, and maybe they’re justified in that, but from my perspective I can’t imagine seeing him as anything less than one of the most talented people alive. He proved this for a lot of people when he adapted a thousand page book about a founding father into a hit Broadway play. It’s his more ambitious piece certainly, but it’s easy to forget that he proved his worth nearly a decade earlier with In the Heights, a massive celebration of the world that he grew up in. Washington Heights, a corner where everyone is struggling to pay their bills, one where the sun beats down hard enough to cause blackouts, and one where nothing’s future is certain. Washington Heights was dying, but Miranda chooses not to see it like that. It’s his home. It’s all of his best memories. It’s the place that one of the most iconic playwrights alive called home. And it’s now the subject of what’s likely to come out the movie of the year.

Looks like the cat’s out of the bag. Even a month before the film’s official release, In the Heights has proven itself to be the bubbly, warm crowd pleaser to beat this summer. It’s the best movie about the American dream in years, and from me, really, that means a lot. Apart from just a few exceptions, I am not a fan of musicals that are adapted into films. It took a while to figure out why, but ultimately I think it’s because they’re two drastically different mediums. So many movie musicals paint the setting as so drab and serious, so that when the characters start singing it feels out of place and sort of dumb. There are, of course, exceptions to the rule. I love movies like Rent and Rocketman because they lean so heavily into what makes musicals fun. They’re giant and dumb and sincere and that’s why they’re great. In the Heights relishes being a musical just as much as it relishes the titular block. The editing is flashy. The director paints everyone and everything in such beautiful light. The cinematography is extravagant without taking you out of the dying town or the American dream. With In the Heights, Jon Chu has intentionally aligned the stars for his film to rank among the all time best movie musicals. The songs never feel like they’re coming out of nowhere. The cast, largely made up of Miranda’s frequent collaborators, bring endless love to the musical, the film, and to the concept of art itself. In the Heights is the kind of film that sticks with you. It’s one to die for and one to live in. It follows you around, like all of the classic cinema that came before it.