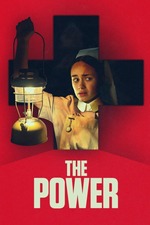 Lazy uninspired writing coupled with some lazy, uninspired filmmaking. In a movie where the premise is that the power is cut and the hospital is scantly lit, they forgo the possibility of having unique atmosphere and tension deriving from shadows and negative space, instead opting for your dime-a-dozen jump scares. And rather than putting in the work to actually build atmosphere, they instead choose to just blare the most obnoxiously obvious sound effects in your face, mimicking the effect of slapping you in the face while shouting, "You're supposed to be scared here!" As for the writing,I can only really describe it as predictable, one-note and faux-deep.

Admittedly, some moments work despite the film's best efforts to undermine the whole endeavor, and those are mostly due to being carried by the stellar performances — namely of lead Rose Williams, as well as Gbemisola Ikumelo, playing secondary character Comfort. But despite those precious few moments where things click, the vast majority of the film, and the film taken as a whole, is just so bleh.

- It really does speak to how dour this year's releases have been thus far that this — a movie I don't even like! — is currently #3 on my rankings of films from this year.