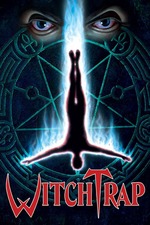 I can't figure out for the life of me why Kevin Tenney, the director of all 3 films and writer of Witchboard and this film, would have bothered to write or direct this film. It has absolutely NO redeeming qualities, something that both of the other two films had going for them. The actors here are all bad. Either he asked them to read their lines like they were reading a copy of Wuthering Heights in their sophomore English class, or if he deliberately chose the worst actors imaginable. Or perhaps just dragged people from off the street in to read lines for his film. Tenney even acted in this film himself! And, not well, I might add.

This film is almost insulting, right down to the font on the movie poster. Far too much like Witchboard, a film that is a massive guilty pleasure of mine, for my liking. I guess I can't be too mad though, it IS a spoof piece. Just not an enjoyable one. I'm all for bad 80s films, but there is a limit.

It gets 1 stars because I don't give 1/2s and because it's not good enough to round up.