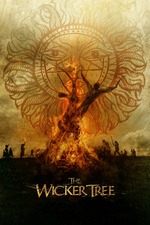 I can't understand why Robin Hardy would even want to film this. Some of the dialog is so incredibly cringe-worthy. I guess it's supposed to be his reimagined Wicker Man, but it doesn't even come close to being as thought provoking, creepy, or entertaining as The Wicker Man.

I just don't think that southern American christianity is as good for something like this as Catholicism, or even Protestantism from Scotland. I fail to see how this came together in his mind. If I didn't know any better I would have thought the two films were done by completely different people.

Something as simple and powerful as the birth of the first child after years of societal sterility is completely negated by a ridiculous room full of dead May Queens. I wonder if this film was, in any way, an influence on Midsommar (and, I've only read a synopsis of that film, I won't see it until June for obvious reasons). There are some indicators that there will be similarities.

I guess I would consider this film the sequel to The Wicker Man that no one asked for and no one needed. You can't match perfection and this one sure didn't even come close.