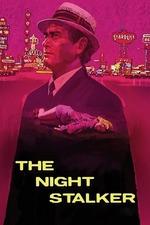 I'm not sure what to make of this made for TV Vampire Noir movie from 1972. How this ended up lacking a "comedy" tag I'll never know. I thought the entire movie was hilarious! It was definitely NOT what I thought it was going to be at all.

I can't decide if this is a parody or what. I can't even really review the movie itself. It's the story of a newspaper reporter that believes a vampire is responsible for a string of deaths in 70s Las Vegas. Darren McGavin (A Christmas Story) plays Carl Kolchak, the investigative reporter. I've always loved McGavin, well since I was a young adult anyway. He doesn't disappoint as Cark Kolchak.

But, I'm still really perplexed about just what this was supposed to be, it was apparently a hit in 1972. I was admittedly very enthralled with 1970s Las Vegas atmosphere. I am a west coast gal at heart after all and even though Las Vegas is smack dab in the middle of a desert and not all "west coast", I consider it a part of west coast appeal.

But, this is straight up comedy as far as I'm concerned, right down to the "suspect description" during a briefing. It was hilarious.

I knew that eventually I would happen upon a film that just confused me. Today is that day. It was enjoyable, though!