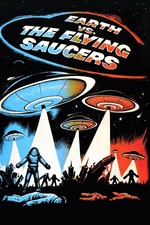 It must have been a kick in the pants to be alive in 1956 with films like this coming out in theaters. We look at them now and we either see cheese or a relic. And, who came up with the term "flying saucer"? And, why a "saucer"? Why not a flying hub cap? That's what they look like to me.

All jokes aside, with a title like this you can't help but expect the typical 50s B rated sci-fi. Interestingly enough, this one is far better than a film with that kind of a title should be, theoretically. It's also got plenty of stop motion animation courtesy of Ray Harryhausen, and I am always in the market for Harryhausen films. I saw the colorized version, but I think I'm going to track down the old black and white to add to my collection. It's a keeper.

It's kind of funny how the aliens land and the first thing we do is start shooting at them with artillery in this film. As opposed to Independence Day where they waited a bit to find out what the aliens intentions were, until they decimated D.C.

Plenty of action in here to suit me, it gets started right away and keeps going throughout. No boring downtimes, here.