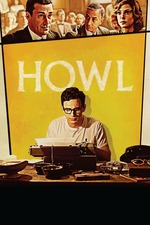 Howl is an interesting, artistic and (mostly) true "interpretation" and/or depiction of the 1957 public obscenity trial of Beat Generation poet Allen Ginsberg's work in San Francisco that was the result of a burgeoning outrage -- held by some individuals ... which turned into more individuals -- over the titular poem. That Howl contained outrageously uncomfortable (!) references to illicit drug use in addition to textual (!!) pornography -- including one abominable allusion to male motorcyclists (!!!) -- the moral majority objected very loudly to it at the time which culminated in the arrests of the publisher of the book of poems as well as a bookstore owner who sold the book to an undercover police officer. SNAP!!!!

Ginsberg's relatively lengthy poem was written and separated into three sections detailing his "lament for the Lamb (youth) of America" as it was written during the US intervention of the Korean Conflict. He was opposed to militarism, the greed of capitalism and societal conformity that are all facets of prideful nationalism during war that lingered long after war was over as well.

James Franco (Pineapple Express) plays Ginsberg and is the only actor with a significant amount of screen time in Howl as the movie is (also) presented in three different parts: (1) a personal interview with Ginsberg directed toward the camera; (2) snippets of the trial with pro-Ginsberg lawyer Jon Hamm ('Mad Men') taking on anti-Ginsberg lawyer David Strathairn (Good Night and Good Luck); and (3) an animated re-telling/vision of Ginsberg's work from the past to the 1957 'present'.

Franco gives a commanding yet restrained performance in Howl as much of it is him devotedly reciting his poetry in a coffee bar. He is better here than he has been in most of his work since 2010 ... which is also the year of his Oscar nominated role in 127 Hours! Franco's career has been in a (considerable) funk since this praiseworthy year and here is to hoping he'll turn it around sooner rather than later.

Audiences are treated to a parade of cameos in Howl as all appear in the courtroom scenes either supporting or objecting to Ginsberg's work such as Mary-Louise Parker (Fried Green Tomatoes), Jeff Daniels (Dumb & Dumber), Treat Williams (The Deep End of the Ocean), Alessandro Nivola (Junebug), and Aaron Tveit (Les Miserables). Bob Balaban (Best in Show) also co-stars here as presiding Judge Clayton Horn.

The unusual structure (as well as composition) of Howl comes from co-writer/directors Rob Epstein and Jeffrey Friedman (Lovelace, The Celluloid Closet) who mimicked Ginsberg's philosophy of non-conformity making an interesting piece of film that comes across as a pseudo-experiment of mediums. I think the pieces work together for the most part and its short runtime (84 minutes) works in its favor as there really isn't enough "story" to extend the film much further as the two directors appear to know their film's limits.