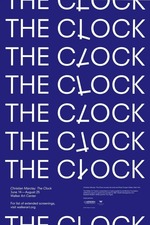 Saw all 24 hours. The whole thing was sublime, and I can only offer some musings and observations:

• These characters do so many things with clocks. They start the clocks. They stop the clocks. They enter the clocks. They climb the clocks. They pull the clocks out of corpses. They kill using the clocks. They kill the clocks. They embrace the clocks. I was geniunely curious if someone would pull an American Pie with a clock.
• I knew the clips were edited together, but I wasn't expecting the editing to be so tight. During the busier segments, the seams between films are erased. One character enters a doorway and someone else comes out of another, or in a nod to Marclay's earlier short Telephones, one character picks up a phone and anyone could be on the line. It becomes a single gesture split across films, a bit like Meshes of the Afternoon. Many of these sequences exploit natural points where we expect a cut and left me confused about which shots came from where.
• After less than an hour, I had already lost track of time. I found myself eyeing clocks but not interpreting the time.
• The o'clocks are always engaging, with ticking to anticipate the hour and bells and alarms to commemorate it.
• Some of the films show up more than once in a short period, stretching a scene out into real time. Reese Witherspoon starts to leave a hospital in Just like Heaven, and we revisit her later in the parking lot. It lends a sense of realism to the scenes. One of the best gags comes from the series premiere of Hitchcock's Suspicion, where a man is bound next to a time bomb over the course of an afternoon and his reappearances turn darkly comical.
• For more established actors, a long enough viewing will return to various points of their careers. It's a real treat to see Meryl Streep, Jimmy Stewart, or Maggie Smith vacillating between ages.
• The Clock is a brutal test of the actors' performances. From a random point in your career, there are a few seconds during which you can establish a character, without any sort of context or plot to help. The shortcomings are readily apparent held up next to other actors.
• In something of a twist, the structure lets the wind out of suspenseful films like The Servant or Rosemary's Baby. There's not enough time to establish the same sort of tension, and they morph into low-key, slice-of-life segments. It's the more heavy-handed thrillers that maintain their tone, especially when they're soundtracked.
• So many of these shoddily constructed thrillers with stars like Denzel Washington and Jason Statham. I'm not sure how we as a culture allowed this to happen.
• Why do all these people spend so much time in train stations?
• The thrill of recognizing a film never wore off for me. Likewise, some of the more common editing tricks, like a character in black and white reading a digital watch, still made me laugh after hours of watching.
• All in all, The Clock is a bit overlong. If Marclay had just cut some of the filler times (like 4:36am or 3:17pm), he could've had a nice, lean 18-hour day.