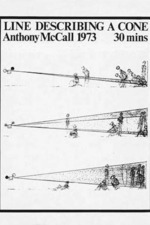 A partial rewatch, since the last time I saw this was in a cave where the projector ran out of gasoline partway through the film.

This was a reframing of Line Describing a Cone, with three configurations of two prints of the original film. The projectionists fed one reel through backwards so that one cone became completed while the other became depleted. It was amusing that even with a small crowd accustomed to expanded cinema, there was a dynamic where people played off each other and became increasingly bold in how they interacted with the light. The first run inscribed one circle inside the other, and the second laid the circles next to each other. The third (and best) ran without a projection screen, so that the cones just hit a black curtain on the wall. It made it possible to see the entire cone. By the end, there was just a small beam cutting across the room, and the film scratches produced dazzling shards of light.