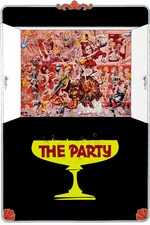 “The Party” is the closest that Hollywood has ever come to replicating Jacques Tati.

It’s also - unfortunately- hideously racist; even within the context of its own time.

The only non-“Panther” collaboration between Blake Edwards and Peter Sellers, “The Party” stars Sellers in brownface as a minor Indian actor that finds himself fumbling around a bigwig Hollywood house hang.

Much of “The Party” - filmed only from an outline of a script - is deeply rooted in the environmental humor of Tati. But filtered through Hollywood’s lens, it becomes an experimental film that laid ground for so much of modern comedic cinema.

The improv-heavy and in-sequence shooting format is now all but standard form; cultivating invention and spontaneity that have allowed some of the greatest screen humorists to flourish. So, too, does “The Party” predicate contemporary catchphrase humor, with the lasting contribution of “birdie num nums.”

As in the best moments of the “Panther” series, Sellers and Edwards meet on a mutual ground of adoration for colorful chaos. Edwards’ meticulously-crafted environments are: crashed, destroyed, and drenched in soap suds in “The Party.”

Although no less an authority on Indian culture than Indira Gandhi himself was said to be a fan of the film, it’s regrettable that Sellers felt the need to filter his outsider humor through skin darkening makeup. The elegant absurdity that he carried into each of his performances would have been more than enough to set him apart from the crowd.