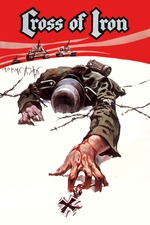 “Cross of Iron” brings Sam Peckinpah’s poetry of the broken loner to the most desolate place of all; the front lines of battle.

“Cross,” which Orson Welles deemed his favorite anti-war film since “All Quiet on the Western Front,” depicts the failing assault of German troops on Russian territory in 1943.

Shot in Yugoslavia on a budget so small Peckinpah had to reach into his own pockets to pay for crew members, “Cross” still retains an epic emptiness that’s standard for the best works in its genre. By focusing the narrative on enlisted troops, Peckinpah has reason to linger in the mud and guts. These were the men whose bodies were paving the path of the collapsing German push eastward… and eventual retreat.

Every scene of “Cross” is a death, a cut, a mutilation, a fatal injury. Peckinpah depicts none of the tactical decision-making of the men with many titles. The characters of “Cross” are soldiers who will scrap to the end to earn one piece of decorative tin.

Peckinpah shows an immediate aptitude for the war genre. His messy expressions of hopelessness don’t even tease at the obtainment of legacy or honor. They aren’t even a shoddy cover for masculinity. By the time the extensive retreat sequence begins, any spiritual armor is long since stripped away. Peckinpah portrays a relentless onslaught of explosions and artillery fire that build to a monotone of devastation.

In “Cross,” Peckinpah’s usual mantra of ‘We all live alone,’ is replaced with ‘We all die alone. And badly.’

Bring Me the Head of Alfredo Garcia