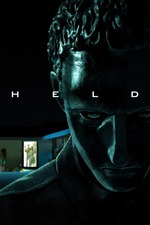 "Held" begins with a young woman, her boyfriend and his friend, all drinking in a car that is parked on a concrete tarmac in the middle of nowhere. It is all going well until the boyfriend announces, "She's all yours," and then tells his horrified girlfriend, "Relax, babe. You're not going anywhere." Remotely from the driver's seat, he closes her window and locks her door to ensure that she is held in place for his friend, sitting in the back with her, to use sexually. The aftermath is thankfully not shown - but what we do see is the prelude to a very particular kind of rape, perpetrated not by strangers, but by men known to the victim who feel that she is their property to give and take at will.

Many years later, we see the same woman, Emma (played by the film's writer, Jill Awbrey), who has mostly moved on from this harrowing incident in her youth, and has long since been married, if not entirely happily, to a different man, Henry (Bart Johnson). For their ninth wedding anniversary, Henry has arranged a weekend getaway at an isolated rental home with all the mod cons, in the hope that amid such luxurious surroundings, they can mend some bridges in their relationship. A little affection from Henry while lounging on the patio is dismissed by Emma, who clearly has something on her mind.

We get a tour of the house, mainly noting a locked door, a slant in the kitchen floor, and the home's elaborate security system. All of these, of course, will come into play later, and from early on, it's telling that the filmmakers are primarily concerned with the mechanics of details and mysteries that will drive the plot going forward. They go to bed, feeling a little faint from a nightcap of whiskey. In the morning, Emma awakens to coffee, flowers, and a card on the nightstand. Henry, though, has been asleep the whole time. Neither of them knows how Emma ended up waking up in different clothes than she was wearing upon falling asleep.

The TV in the living room shows footage from hidden cameras inside the house. A voice comes over the home's speakers, telling Emma and Henry that they must obey his orders. The security system activates, trapping them inside. If either of them disobeys or tries to escape, a little device implanted under their skin gives them a painful shock. The voice forces the two to play a happy, overly traditional marriage: the husband opening a door for his wife, the wife smiling and thanking him, the husband relaxing while the wife cooks dinner, an evening of - in the most discomforting scene - coerced passion.

And here I will cease with the plot points, for "Held" is a cruel intellectual joke played on its characters - who endure boredom, self-contempt, hate, and sometimes even death without being allowed to know they're only part of an existential parable. This story, which sounds potentially interesting, is told by directors Travis Cluff and Chris Lofing in such a strange, distancing way that there's hardly a moment when we really believe we're observing plausible human beings. It's all just the manipulation of events and ideas.

Awbrey takes some big swings at analyzing gender roles and the patriarchy, but misses most of them. The themes of this get lost as the voice is more concerned with forcing Emma into her role than teaching her to submit to it for the good of her marriage, and paired with the opening scene about sexual assault and a twist most audience members will see coming, it's even more difficult to recognize what the movie is trying to say. Other than the obvious, of course, which is that women are in possession of truth and goodness and men can only benefit from learning from them. That is, unless they are rapists or abusers, which is typically the case in pop culture.

It makes me terribly depressed watching a movie like "Held," which resorts to using the same type of prejudice we see towards racial minorities and shifting it over to gender politics. But I don't want to get mired in male outrage, or dismiss the countless cases of men harming women. I am simply dismayed at the movie's thought process, which tries to prove that it is not humanly possible for a man to have genuine, thoughtful, caring feelings for a woman. No rape. No twists of the plot or character. No ridiculous scenes where they shout such obvious lines as "You have to obey me!" None of that nonsense.

Yes, I understand. I'm a male, and I'm white, so that automatically puts a few strikes against me. I get it. Really, I do. But if I'm going to see myself represented as the villain in a horror movie, I would at the very least want to see it done with a bit more class.