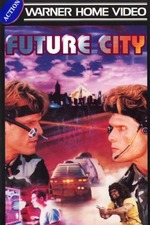 A wonderful & fascinating dystopian sci-fi pilot from 1994, starring Sue Ellen Mishkee & Tobi from Seinfeld, that (very sadly) was not picked up

Penned by prolific tv writer Jonathan Glassner, and directed by my main boi Jorge Montesi.  This is definitely one of the better efforts from both

In a nutshell:  Sometime in the 21st century, the earth has devolved into an apocalyptic hellscape.  An ‘eternal youth’ serum is administered to every human on earth.  Everything goes swimmingly for the first few months....until 90% of the planet’s population begins to suffer adverse reactions to the drug, transforming them into savage neanderthal mutants.  The 10% that weren’t afflicted reside within enclosed, guarded cities around the world, such as Island City

Citizens are only allowed to mate with one another based upon genetic compatibility, which is discerned via a coloured crystal implant.  These DNA crystals are located near a person’s thyroid.  One can only be with another person intimately if the colour of their crystals matches up.  This was seemingly implemented by the powers that be, in an effort to reduce diseases & birth defects

The crystal implant storyline was probably the most intriguing idea at play here.  Montesi’s sharp & exciting directorial style elevates this into something greater than it would have been had it fallen into less talented hands

Tasteful casting across the board, and surprisingly fleshed out characters for a pilot.  It’s a real shame that Island City didn’t get picked up.  By the mid 90s, television had begun to fall off a cliff (with film/cinema to follow suit not long after), far from the dizzyingly inventive heights reached in the 70s & 80s.  The fact that something as ingenious & as exciting as Island City didn’t get picked up in 1994 speaks volumes