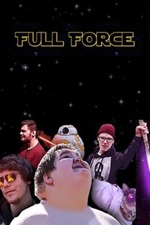 Idubbbz is one of the few YouTubers I actually watch. I know people have problems with his constant use of racial and homophobic slurs (Which he has satircally addressed in a smart way), but I kinda like his take no prisoners approach to the worst of what YouTube has to offer and he's always had a good eye for outrageous comedy that also tends to have a point, despite how crass, crude and offensive he can be. He's smart and knows what he's doing.

When I heard he dropped a borderline feature length documentary, I was intrigued. For a first attempt, it's actually pretty solid, rough round the edges for sure, but he takes an interesting subject and manages to squeeze out a decent amount of humour and heart. There was this niggling part of me that was expecting him to be nasty and mean spirited, but he handles it very well with his documentary on the fellow YouTube Chris "Fatty".

Part of me was uncomfortable watching this though, I'm rarely put off by any sort of content (I'm desensitised to the point of being able to watch real torture and execution videos without batting an eye lid), but seeing someone this grotesquely obese just made me feel nauseated. He seems like a nice guy, but there is no excuse for someone to be that size at all, it is sickening and by the sounds and look of it, he's at least made progress into becoming a human being that won't die of a heart attack in the next few years.

What really surprised me was the dark turn this took with the introduction of Robert, Chris's friend who is not on talking terms with Chris at the time of filming the documentary, although they managed to get them together for a few minutes after conducting an interview. Now that brief interview sent off nothing but alarm bells, I can only imagine how terrified Idubbbz was during the filming of that. This guy was completely unhinged, terrifying and more or less admitted to being a schizophrenic who may have killed someone and got away with it, which I had an easy time believing. That guy needs to be put away ASAP, for the safety of himself and everyone around him.

It does end on a very positive note about being yourself and going "Full Force" with your personality saying fuck whatever anyone else thinks. It's a rare moment of positivity from his channel and it was quite a sweet note to end it on.

Idubbbz obviously has a long way to go if he wants to be a serious documentary filmmaker, but he gets off to a decent start here as he clearly has an eye for interesting characters with stories worth telling. He somehow managed capture a time in the backwaters living of America here that isn't groundbreaking by any means, but is quite a special and sweet piece of homemade filmmaking. I'm very excited to see what he does next.

The Standoff at Sparrow Creek