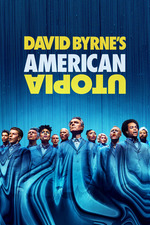 Kind of a revisit, since I caught the stage show in Boston before the world ended. I think I liked it more as a Spike Lee movie than by myself in the nosebleeds, though I was sad this version didn’t include my favorite line from the show. Obviously not Stop Making Sense or even Live in Rome, but still a blast—easily the best thing to come from Byrne’s solo career since “Loco De Amor.” A lot of reviews complained about Byrne’s liberal politics, but a) he’a got a sense of humor that makes the voting stuff go down easier, b) the Janelle Monae cover is genuinely affecting and c) the man wrote “Listening Wind” and “(Nothing but) Flowers,” let him be a boomer in peace. Setlist could’ve used some tinkering, the second half’s a little too heavy on the solo stuff that I’m not as fond of. Even with the flaws, though, I’m still in awe of Byrne. The man is following his muse wherever it takes him, even if that means singing, playing, and dancing for two hours a night at age 67. I hope he stays with us for a while.